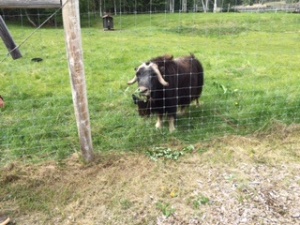 Yesterday we visited the Large Animal Research Station which is operated by the University of Alaska Fairbanks. We had the opportunity to view muskox up close and learn about these animals who can survive and thrive in the arctic. Although muskox were native to Alaska they had disappeared from here by the 1920’s. The only remaining herds were in Eastern Greenland and arctic Canada. In 1930 34 animals were brought to Fairbanks and later relocated in various parts of Alaska to form new herds. By 2000 the descendants of the original muskox numbered almost 4000.