Today we saw “The Mountain ” to the top from a distance. It is usually covered in clouds. The pics were distant as that’s where we were at. Will try for some closer later. The Mountain was named Mt McKinley by a legislator in a so called honor to a man that never saw or had the fortitude to see it, president McKinley. This state calls it Denali which is a Athabascan Indian name meaning “Great One”   which is for sure what it should be. The State has been trying to get it changed but the state of Ohio (the birthplace of McKinley) stops it. Very sad and greedy. 20,237 ft and 3″ tall. 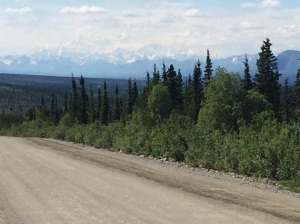 2 thoughts on “The Mountain”